A Threat to the Freedom of the Press 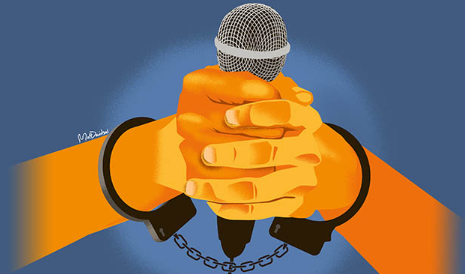 CNN filed a lawsuit on October 16 in the Southern District of New York PEN America stating that Trump’s actions “stifle exercise of the constitutional protections of free speech and a free press. . .public threats to use his government powers against news organizations and journalists. . .the president has violated the First Amendment”. The Trump administration ensured that they would write rules that would guarantee the ban of Acosta from the White House. Hence, CNN requested an emergency hearing in order to retaliate against “Defendant Trump from directing any officer, employee, agency, or other agent or instrumentality of the United States government to take any action against any person or entity in retaliation for speech that the president or his Administration do not like”. However, on November 19, the White House had sent a letter to Jim Acosta informing him that his hard pass had been restored, they still have the right to revoke Acosta’s press credentials in the future if he fails to comply with the new rules laid out in the letter. The letter asserts that reporters may only ask one question and follow-up questions will only be permitted “at the discretion of the President or other White House officials.” 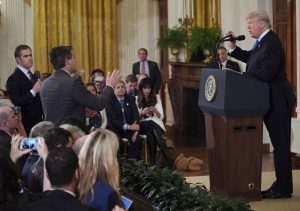 Does the White House have the power to control and regulate who covers it? No White House executive has ever revoked a reporter’s hard pass in history. Trump has had a lot of difficulty dealing with the media in the past, but what magnifies and detaches this case from his previous contentions with the press was the direct action of apprehending the rights of reporters to do their job. Trump has labeled journalists “the enemies of the American people”, but in order to acquire knowledge and information, we need them to get our answers. The responsibility of the press is to persuade, to debate, but to also use correct information for the public. If the press is hindered from doing so, indirectly, the public is prevented from obtaining the full perspective on any topic.

The Founding principles of the United States exemplified throughout the Constitution are Limited Government and Representative Government. Trump has gone beyond simply disparaging the press for its unfavorable viewpoints, and he has taken it upon himself to use the power of the federal government as a mode of retaliation against all journalists and writers.

His approach explicitly violates the First Amendment that “Congress shall make no law respecting an establishment of religion, or prohibiting the free exercise thereof; or abridging the freedom of speech, or of the press; or the right of the people peaceably to assemble, and to petition the government for a redress of grievances.”

The First Amendment is what maintains our democratic form of government. Because of it, we are able to withhold our civil liberties. Countries such as Finland, Netherlands, Denmark, Norway, New Zealand, Switzerland, Ireland, and Jamaica share the same liberties for the circulation of the press. However, Trump’s intent is to use intimidation and power to silence any commentary that questions his tactics or administration. The Constitution doesn’t give him the power to filter criticism, yet he misuses his power as the President to directly target anyone who threatens his image. It is despicable that reporters must succumb to the limitations on questioning and commentary enforced by the White House. This tightens the window of information for the public. The press isn’t able to complete their job due to the government’s interference with our First Amendment rights.

As a newspaper, we are given the freedom to offer an outlet on any topic whether it disagrees with the general consensus or not. We pride ourselves in this opportunity to grow in our understanding of the world because of our First Amendment rights. What is your opinion on Trump’s response to the press?