Fall is arriving, but it has left Illinois High School and Big Ten Football behind 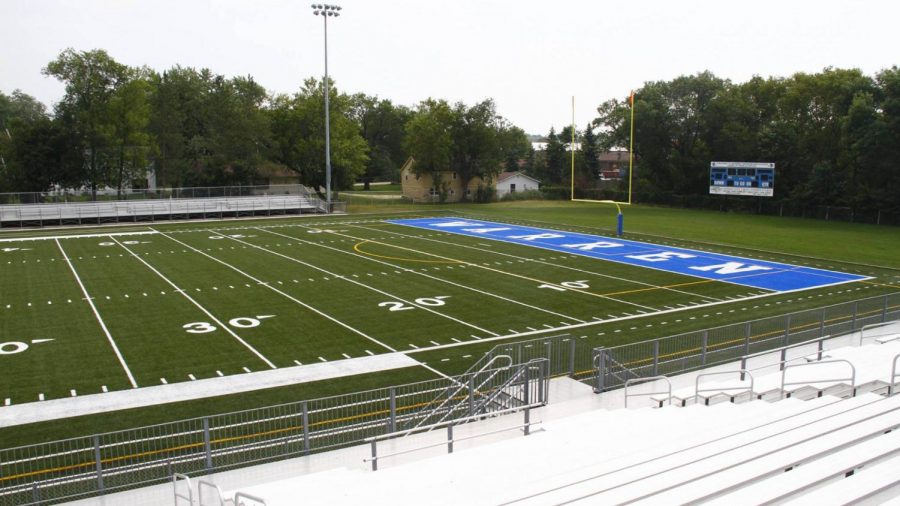 The aroma coming from the grill, the sound of the band, and the roar of the student section as the ball gets kicked off for yet another year of the tradition of Friday Night Football. Unfortunately, none of this will happen in Illinois this year due to the COVID-19 pandemic that struck the world in March, leaving a void in our football jammed weekends this fall.

Fall is the best time of year for a football fan. High school games on Friday nights and college games that start at 11 am and finish up around midnight on Saturdays. The best part is when you think you’ve had enough football for the weekend and suddenly noontime hits on Sunday and the NFL kicks off on your TV. The weather starts to change and the leaves start to fall, but nothing beats waking up on Saturday morning and turning on college football on FOX to hear the voice of the great Gus Johnson calling the Big Noon game. While that game is going on, you channel surf to different games on ESPN, ESPN2, ESPNU, Big Ten Network, SEC Network and so many more channels with a football game on. Life is good.

We will have most of that, but it will be different. There won’t be very many, if any, fans in the stands, and the announcers most likely will be broadcasting from studios hundreds of miles away, instead of the press box, calling the game through their eyes. There won’t be any tailgating before and after games. In places where there are no fans allowed, the stadium, that usually fills at least 60,000 people and thousands more around, it will be desolate.

On July 29th, Illinois High School football fans got the tough, yet understandable news from the IHSA that there won’t be a High School football season in the fall of 2020. Instead, it will be in the early spring of 2021. This is quite the opposite than most states throughout the midwest, as Indiana, Iowa, and Wisconsin are all playing their seasons right now. It seems to be going pretty well as Indiana is on their third week of the season and there have been no reported issues. That’s good, and I hope it stays that way, but it only takes one to shut down the entire season.

“It’s going to be a good indicator to see how those things went in those other states,” Warren Head Varsity Football coach Bryan McNulty said of the three surrounding states playing and Illinois not.

IHSA Executive Craig Anderson erred on the side of caution when deciding to push the playing of the contact fall sports to the spring, but if surrounding states get through the seasons with no hiccups, was it the right decision?

“No way,” McNulty said when asked about if the atmosphere will be like it is for a normal fall season. “Who knows if they’re even going to allow fans and if they do, at 25 percent capacity. It won’t be the same from a fan’s perspective. It will definitely be different.”

High School football won’t be the same kicking off in March rather than late August.

Usually, the season starts with a beautiful August evening of about 80 degrees, and people show up in bunches. The season is scheduled to start the first Friday in March. Historically, the first weekend in March is about 10 degrees and there’s snow on the ground. Most importantly, we likely will not be seeing a full house in the stands for two reasons. One, we all enjoy high school football, but I don’t know a single person that loves 15-degree weather. Remember that these games will start at 7:00 pm in March. If you think it’s cold when the season wraps up in November, just wait until March 5th. The other reason is the fact that we are living through a pandemic. Even if there’s a vaccine by then, a lot of people will still be cautious and unwilling to risk their safety. A vaccine doesn’t mean the virus is eradicated and the world will be “back” to normal overnight. The handshake won’t be back right after the vaccine is distributed. Like everything else, it will slowly become a part of our society again. Until then, fist and elbow bumps are acceptable.

Although Illinois is one of the few states that isn’t playing football this fall, multiple major Division 1 conferences are postponing their seasons, two of which are Power 5 conferences.

On August 11th, Big Ten commissioner Kevin Warren made a decision, along with other university presidents, to postpone all fall seasons, including the biggest revenue maker in football. The presidents decided with an 11-3 vote with Iowa, Nebraska, and Ohio State being the only schools to vote yes on playing.

“People are doing the best they possibly can, but when you go from the acclimation period to getting ready to put on pads and contact, and you look at the overall numbers during this global pandemic as far as caseloads, they have not decreased, they have gone up,” Commissioner Warren said of the decision during an interview with ESPN.

Most fans are disappointed, but they understand. On the other hand, the minority is angry about this decision. Are they angry because they feel bad for the student-athletes that have worked their tails off for this moment? Or are they angry because the league won’t let student-athletes risk their lives just so people can have entertainment on Saturdays?

The original plan was to follow Illinois High School football and play a spring season with just conference games. Over the past 3 weeks, that plan has come back to now starting the season on October 10th. That became the latest last Tuesday after reports said that they looked into starting the season Thanksgiving weekend and playing the conference only season in an indoor stadium (likely Lucas Oil Stadium in Indianapolis) in a bubble format. The Big Ten Presidents and Chancellors will do a re-vote in the next couple of days to see when/if the football season will start in the fall. If the vote passes, then there will be Big Ten football in 2020, but most likely not until early October. There would need to be four more presidents who changed their minds over the last three weeks, which is highly unlikely, but still possible.

For now, instead of dwelling on what we’re going to be missing this fall, let’s be excited about what is to come in the sports world after we fight off this pandemic together.