Insurrection at the Capitol: What Happened and Why? 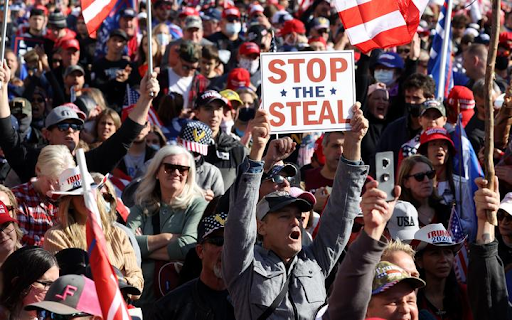 On the afternoon of January 6th, the nation was rocked with news of the US Capitol being stormed by armed and dangerous Trump supporters. What had seemed, to most people, a simple rally orchestrated by Trump supporters opposing the 2020 presidential election results just outside the building had become a deadly attempted coup of sorts. But before any discourse on the events of that fateful day, we first have to understand why the storming happened in the first place.

On November 7th, 2020, Joe Biden won enough electoral votes to pass the threshold needed to claim victory against incumbent Donald Trump in the presidential election. However, in the early days of the election, President Trump had already started declaring himself victorious. He claimed people in the “deep state” were trying to steal the election from him and that fraud had been rampant during the electoral process, yet offered no evidence to back these claims up. Nevertheless, his supporters latched onto this and #StoptheSteal became a rallying cry that took over social media websites like Twitter and Facebook. The graph above from the BBC illustrates the popularity of the hashtag from November to January.

Following the announcement of Joe Biden’s win early on November 7th, a rally dubbed the “Million MAGA March” took place at Freedom Plaza in D.C. and attracted thousands of angry Trump supporters. Many who attended this march were also in attendance at the Capitol insurrection. President Trump, meanwhile, was spiraling and calling for recounts in swing states and vehemently denying the outcome of the election. Swing states like Georgia, Michigan and Pennsylvania were largely pressured for recounts and Georgia eventually ended up recounting their votes three times, with Biden winning each time. Even after the results were confirmed multiple times, President Trump and his supporters were not satisfied. Democratic lawmakers and other important politicians in each state were subjects of harsh criticism and angry protests.

On December 14th, two days after another Stop the Steal march in D.C., the Electoral College confirmed Biden’s electoral votes. This was one of the final steps needed before Biden could take office and Trump and his supporters were quickly realizing legal action could not save the presidency.

President Trump and his advisers were looking into ways he could keep power through military might and the possibility of using martial law to rerun the election was brought up by Trump’s former national security adviser, Michael Flynn. Chatter about war and revolution was building up on platforms like Facebook, where supporters discussed ideas together. They began resigning themselves to taking direct action and planning “patriot caravans” for carpooling supporters to the Capitol. Open discussions on websites like TheDonald planned tactics to get past security at the Capitol and discussed plans to carry firearms through the city despite strict gun laws. 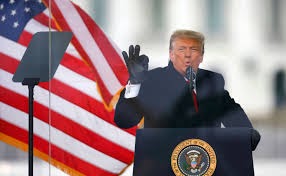 The violence and chaos that was coming was easily foreseeable to anyone watching the signs closely. On January 6th, President Trump addressed his supporters at a park near the White House for over an hour. He urged them to “fight like hell” or else they “wouldn’t have a country anymore.”

And fight they did.

The rioters reached the Capitol a little after 2 p.m, and started fighting with the Capitol police very soon after that. They were trying to get into the Capitol to prevent the election from being certified by the Senate, and the unprepared police were struggling to keep them away from the doors of the Capitol. It wasn’t long before the rioters breached the barricades meant to prevent them from getting to the doors of the Capitol. That’s when the chaos truly started. Although most of the rioters intended for this to be a peaceful demonstration showing their support for Trump, some of the rioters opted for a more violent route.

Five people died during the riots, four rioters and one police officer. Over 50 police officers were injured in this incident, including a Metropolitan police officer who was dragged down stairs, and another police officer who got jammed between two doors. One of the rioters who died was a woman who was shot by police after attempting to enter the Capitol building despite being warned against it. Even though the storming of the Capitol was a very disorganized attempt at keeping Trump in control of the presidency, the fact that people died in the name of the political division is a tragedy, and this attempt should be seen as a warning sign to anyone who believes in democracy.

After the rioters left the Capitol building, a lot of things happened very quickly. Donald Trump, an avid Twitter user, was suspended from the service due to “risk of further incitement of violence.” Other services, such as Facebook and Twitch, have also suspended Donald Trump. Donald Trump wasn’t the only one hurt by these riots, though. Friends of Trump, such as Michael Flynn and Sidney Powell, were also permanently banned from Twitter, and Rush Limbaugh, a conservative radio host, deactivated his Twitter. Parler, an app similar to Twitter, was suspended from Google’s online store, due to concerns that Parler members were seeking to continue the violence that occured at the Capitol on January 6th.

Due to the comments that Donald Trump made before the rioters went to the Capitol, the Democrats in the House of Representatives have elected to impeach Donald Trump for the second time. This will make him the first president to be impeached twice, and if he is convicted, there is a chance he will not be able to run for president again. This decision to impeach Donald Trump just a few days before Joe Biden’s inauguration is a controversial one, and many people have said that impeaching Donald Trump will divide this already divided country even further, especially with Joe Biden’s comments about how he plans to unify the country. Although the current political barriers seem impossible to break, there still are a lot of reasons to believe that the United States of America can overcome these obstacles and become a true democracyonce more.