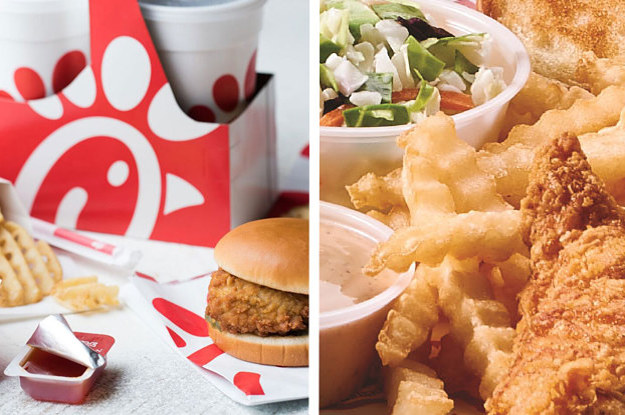 It’s official: the burger is out, and chicken is in. This was cemented for Lake County when Chick-fil-A opened a new location in Gurnee in June 2017. Since then, the line has pretty much stayed constant, taking 20-30 minutes to get drive-thru service at either lunch or dinner. The food must be pretty good to keep all those people coming, right? It is, or at least was, until a new competitor approached: Raising Cane’s. In the weeks since the location’s October 25th opening, Chick-fil-A’s line has been dwindling. I mean, they both have fried chicken and fries, could they really be so different?

Allow me to walk you down this golden lane of fried deliciousness, and point out the good — and bad — of each chain’s meal.
The Bread:

The standard Cane’s meal comes with a piece of “Texas Toast”. I mean, this is not Texas toast. It’s just not. Texas toast should be a thick slab of bread, overly-buttered, and has a nice crisp exterior. Cane’s offered a raw piece of bread, with what seemed to be an attempt to toast on one side. I mean it was decent bread, but certainly not Texas Toast. Chick-fil-A doesn’t lie to its customers at least. They don’t make their buns out to be more than they actually are.

The Sauce:
I’ve going solely off of each restaurant’s specialty sauce. For Cane’s, it’s their Cane’s Sauce, and Chick-fil-A sauce for Chick-fil-A (yes, they have plenty more specialty sauces, but I’m going to go with the standard for the sake of this article). The Cane’s sauce is peppery, but there’s no real flavor. It pairs really nicely with the chicken, but it doesn’t work with the fries. Chick-fil-A sauce, on the other hand, can only be described as heavenly. It’s probably the best sauce in existence. Period. Sweet and savory? Beautiful. It’s really good on the chicken, fries, and I’ve even been known to use it on the occasional sandwich at home. Pro tip: you can buy an 8oz bottle of any Chick-fil-A sauce at the drive thru.

Winner: Chick-fil-A for variety and free sauce (more on that later).

The Fries:
In the Midwest, we’re a bit spoiled when it comes to crinkle cut fries. Any other crinkle-cut fries pale in comparison to Culver’s. Cane’s crinkle fries weren’t great. I mean, they were definitely fries, but the Styrofoam box let them get mushy and soft on the way home. Chick-fil-A’s waffle fries take the cake here. The waffle fry truly is the superior form of potato. They’re stable. Dippable. Salted to perfection.

The Drink:
No comments here, both offer the standard fountain drinks. However, both have pellet ice, which is the best type of ice.

The Chicken:
Now, you have a few different options at each restaurant. Cane’s offers a sandwich and tenders, whereas Chick-fil-A offers a sandwich, tenders, and nuggets. I’m going to be comparing Cane’s tenders to Chick-fil-A’s nuggets, the most popular options at each. Chick-fil-A’s chicken is breaded and a little crispy. It has some flavor, but not great without a sauce. Cane’s chicken is fried, crunchy, and is well-seasoned.

Winner: Cane’s, and it’s not even close.

As you can see, I have broken down the price of standard meals at both Cane’s and Chick-fil-A. I took the total price and subtracted the prices of the sides to leave me with the price of the chicken. It’s why we go to these restaurants after all. At Chick-fil-A, it’s about 42 cents per nugget, and at Cane’s it’s 58.5 cents per tender. Remember: this is comparing nugget prices to tenders, so Cane’s is actually the better deal. At least for chicken. You have to pay extra at Cane’s for more sauce, however, which is not cool.

A quick word on ethics: I didn’t feel it would be right to not bring this up when talking about Chick-fil-A. If you Google “Raising Cane’s controversy”, nothing comes up. Do the same with Chick-fil-A, and the result is a little different. Longtime CEO Dan Cathy (the son of Chick-fil-A founder S. Truett Carthy), publicly came out against same-sex marriage in 2012. At the time, Chick-fil-A (the company) was donating, and continued to donate, to organizations wanting to “preserve the traditional family structure”. Once these tax records became public, Chick-fil-A was called out by allies and supporters, sparking a massive social media campaign to boycott Chick-fil-A. As a result, the company ceased donations to the Fellowship of Christian Athletes and the Salvation Army in 2019. Key word here is “company”. Dan Cathy, and his foundation, WinShape, continue to support anti-LGBTQ+ organizations to this day, most recently donating to a foundation aimed to stop the passage of the Equality Act. However, as of November 1st 2021, Carthy’s son, Andrew, took over as CEO. I’m not going to make any statement, as this is not an opinion piece, so do with this information as you will. Sources I used (and I suggest taking the time to research yourself) can be found here, here, and here.

The Takeaway:
For the time being, it may be well worth your time (and tastebuds) to go to Chick-fil-A instead of Cane’s. I don’t see the “Caniac” hype dying down anytime soon, and the Menard’s parking lot is a lot more stressful than the outskirts of the Sam’s Club parking lot. We’ll just have to wait and see what happens when Popeye’s moves in next year.