Purple and Pearls: The Meaningful Fashion of the Presidential Inauguration 2021 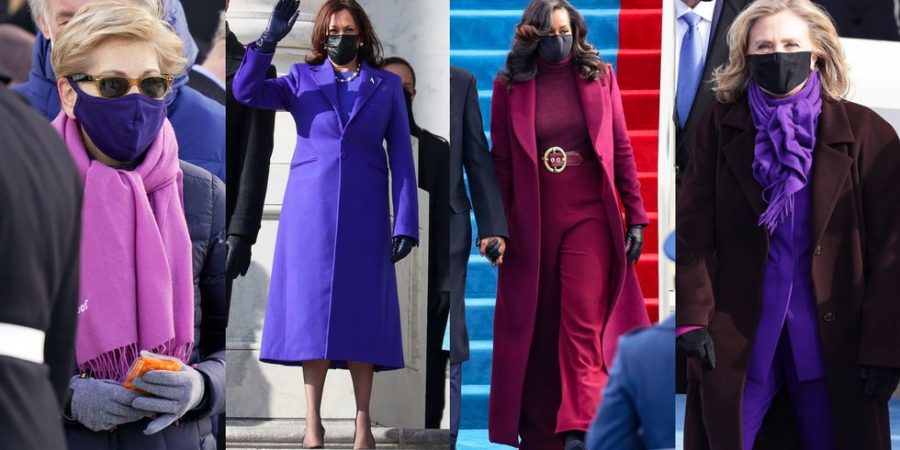 On January 20th, 2021, the first-ever biracial woman was inaugurated into office as the Vice President of America. For such a historic event, it’s unsurprising that the speeches weren’t the only thing sending a message.

In recent years, fashion has become an agent of change across the globe, and the inauguration was no exception. From the pearls women wore to the color of people’s outfits, a message of strength and unity was being shouted out across America.

Rep. Barbara Lee, Jennifer Lopez, and thousands of other women across the country wore pearls in solidarity with Vice President Kamala Harris. Pearls are a symbol of strength, resilience, and beauty in many cultures and this idea seemed to resonate with VP Harris as well as the masses. Facebook groups across the country popped up dedicated to encouraging women to wear pearls on Inauguration Day. Many saw this as a sign of strength for our country and for women.

However, this statement piece was even more meaningful when one looks back into the Vice President’s past. Kamala Harris attended Howard University and was part of the Alpha Kappa Alpha sorority. Alpha Kappa Alpha was the first black sorority in America and continues to call many inspirational and powerful women sisters. In this sorority, it is a tradition and honor for members to receive 20 pearls upon initiation to represent the 16 founders and 4 women who incorporated the sorority. Kamala Harris not only wore pearls to symbolize the resilience and strength of her character but to also give homage to a sisterhood of black women who got her to where she is today.

Another fashion trend you might have noticed at the inauguration was the distinct pops of purple among the women. At an event where red and blue are the standard dress color palettes, the appearance of purple this year stole the attention of many viewers.

Purple has historically been associated with royalty and the women’s suffrage movement. Because of the strides toward equality the women of this movement made, a Black and Asian woman was able to one day become the Vice President of one the most influential countries in the world. While the significance of women wearing purple in remembrance of and gratitude towards the fight for the women’s vote is truly inspiring, it was not the only message women like Kamala Harris, Michelle Obama, Hillary Clinton, and Elizabeth Warren were attempting to get across.

Not only does purple stand for the equality women are still fighting to gain but it is also a symbol of the unity these women wish upon our country. In the week leading up to the inauguration, the division of our country and the extreme political polarization across our country became very evident. The division between the Democratic and Republican parties has become so intense that it is now becoming a danger to our country. Vice President Harris and her crew of other powerful women all recognized the dire need for unity in our country and decided to wear a physical display of that unity. The Democratic party is typically represented by the color blue while Republicans are represented by red, but when these two colors, and hopefully parties, can reach harmony with each other, the color purple is created.

The intentional symbolism that designers and political figures put into their outfits for the 2021 Inauguration is truly inspirational. The message of unity and celebration of how far women have come is one that will stick with me for many years to come and one that I hope inspires you just as much.

For More Information On these Topics: