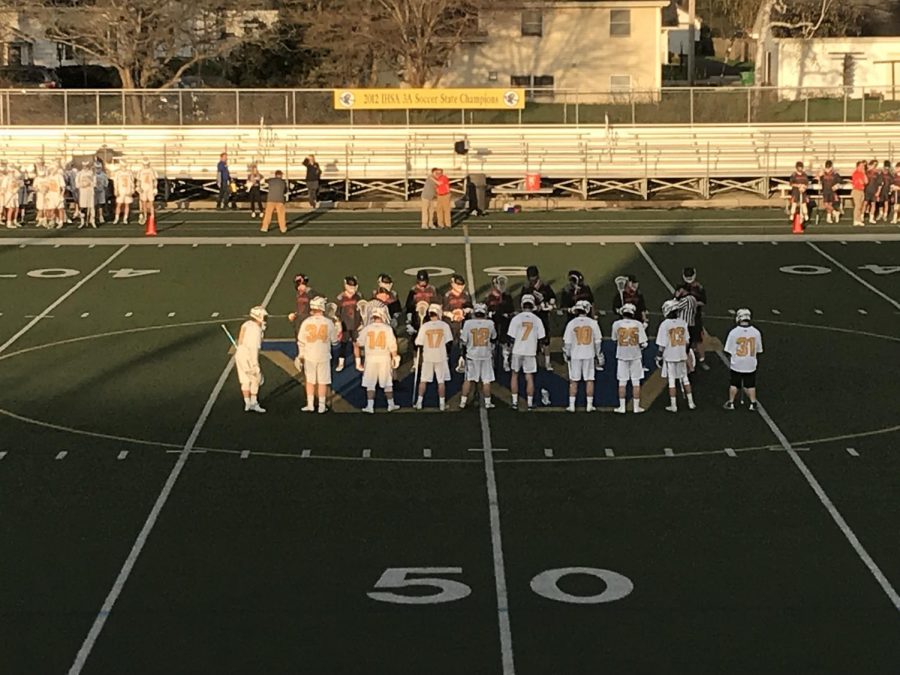 In a conference that has 3 teams in the top 10 in the state, it is not easy to win games.

But the top ranked team in the state, our very own boys lacrosse team made it look easy last night as they routed the 6th ranked Libertyville Wildcats by a score of 15-9 in front of a great crowd at the O’plaine Campus Turf.

The Blue Devils got on the board early in the first thanks to a nice goal by Sophomore Adam Khoury.

Then, Libertyville were on a spurt scoring three straight goals putting them up 3-1. Senior Matt Sierzega tallied a goal for Warren late in the first making it a 3-2 Libertyville lead after 1 quarter. But that was it for the Wildcats leading for the night.

Junior Kevin McCarthy tied the game for the Blue Devils about 4 minutes into the second quarter, and from there they could just not stop scoring. With a hat trick by Junior Carson Ghys, and goals by Senior Nate Crawford and Senior Matt Sierzega’s second of the game, the Blue Devils were all of a sudden up 8-4 at the half.

When asked about the change of his team from the first quarter to the second quarter, Warren Coach Greg Janczak said “Sometimes it takes a little bit. I think the jitters of a conference game kinda got to us a little bit, but once we settled in, everything kind of took over.”

The Blue Devils did more of the same in the 3rd quarter as what they did in the second, during which they out-scored Liberyville 4-1 and were up 12-5 after three. The goals were scored by juniors Logan Haar, Kevin McCarthy, and seniors Nate Crawford and Kellen Martin.

After the game, Coach Janczak told me what his halftime message was to the team, saying, “We needed to play harder, we knew we were the better team.” He also used a quote from Senior Robbie Partlow which was: “Hard work beats talent everyday.”

After two quick goals by Nate Crawford and Kevin McCarthy that nearly put the game away, Libertyville responded with 3 goals in 37 seconds to make the game 14-8 with 4:30 remaining in the game. You could feel the nerves of the many Warren fans attending the game because they knew it was not over yet.

Just about 3 minutes later, Junior Mason Wattleworth put one right behind the Wildcat goaltender to bring the lead back up to 7 goals with under 2 minutes remaining. Libertyville scored with 30 seconds left, but there are no 6 point goals in Lacrosse! That was all she wrote on that game as the Blue Devils defeated Libertyville 15-9. Senior goalie Evan Leden had 6 saves on 15 shots.

Tonight was not just about the game, it was about honoring seniors.

There are several of them on this team, but this particular teen eats, sleeps, and breathes Blue Devil Lacrosse. He is not a player. He is Manager Michael Frecking. Michael has down syndrome, but he shares what everyone on this team has-the love for the game.

At the beginning of the game, something happened that will change my life forever.

Michael played in his first ever Lacrosse game of his life and did what very few can do so well–score a goal! He put the ball past the Libertyville goaltender and the entire crowd went crazy! The whole team came out to celebrate Michael’s first goal, and even some of the Libertyville players celebrated with him.

Michael Frecking’s goal tonight was the highlight of my day, week, and year so far, and I don’t think that will be replaced.