The Importance of Existentialism (2019 Word of the Year) 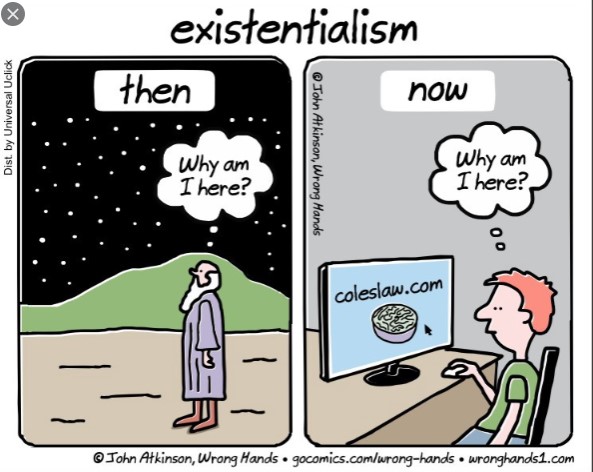 In this day and age, children grow up learning to ask the big questions about themselves and the world around them. This leads to many ideas on gender, sexuality, politics, the environment, and even our very own existence.
Dictionary.com’s word of the year for 2019, existential, is the perfect representation of these Millenial and Gen Z ideas. The adjective has two main meanings:
-Of or relating to existence
-Of, relating to, or characteristic of philosophical existentialism; concerned with the nature of human existence as determined by the individual’s freely made choices
(Dictionary.com Definition)
The first definition seems simple, yet it carries immense weight in the twenty-first century. With the disappearance and extinction of many species due to climate change, existential is a word that has been used to describe the potential deaths of millions of organisms across the planet.
A word with a significance like that should and has been used to create change. Greta Thunberg (a climate change activist) did just that in her interview with BBC News, saying that “[climate change] was an existential crisis”. Through the word existential she was able to convey the gravity of the situation.
This leads to the second definition of existential. The word has very frequently been used by teens who are worried or frightened over something and are having a “crisis”. This exercise of the word has been used so often that it has lost some of its intensity. What is supposed to refer to the large, life-changing choices and dilemmas, is now used for minor things. People have existential crises over bad test scores, breakups, even posts by friends which include unflattering pictures of them, whereas in the past, it was used to talk about dilemmas or changes in one’s faith, identity, nationality, the loss of a loved one, or other major problems.
Regardless of these changes in usage, this word has put a name to feelings that teens previously struggled to describe. It has been used for social justice issues and to provoke change in our communities. For these reasons and more, “existential” is the perfect choice for word of the year.