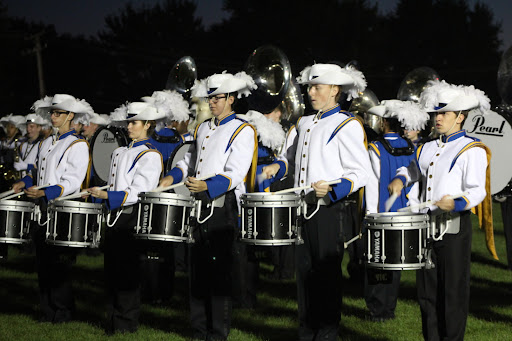 The Warren Township High School marching band marched in the 2021 Lake Park Joust on Saturday, September 11th, and placed 1st in the 2A division and 3rd overall. This is the first competition the band has been to this year, and their first ever competition with director Vince Genualdi at the helm. 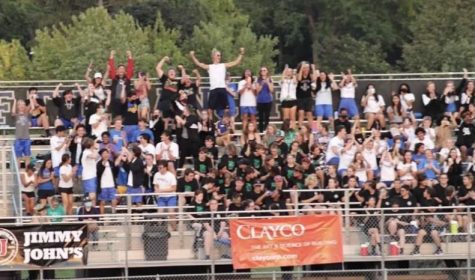 The last time the Blue Devils had a real marching season was 2019, before the COVID-19 pandemic shut everything down.
After the 2019 school year, former director Chris Jenkins retired and was replaced by Vince Genualdi as the director of Symphonic Band II and the Marching Blue Devils. Mr. Genualdi attended University of Illinois and participated in their marching band. He also has extensive experience judging marching band competitions.
Several members of the band were asked questions about the show, rehearsals, and future performances. When asked how they thought the performance at the competition would go, everyone was consistently happy with the outcome. Faith Cabalfin, a senior who plays marimba, said “I was nervous for the whole band, and was happy after the show”.
Jake Snyder, a senior tuba player, said “I kind of thought it would go average, but I was pleasantly surprised when we got third place”. The interviewees were then asked about the preparation of the show. Answers consistently showed that there are improvements that can be made to improve the show. Jackson Cole, Senior trombone player, said “We practice well, but there are definitely things that we could have done better”. Jeanette Johnson, the director of the color guard was interviewed over email, and wrote “We are beginning to be more efficient as we rehearse and I think the scores/placement at the competition on Saturday reflected that. I do believe there is still a lot of growth that is needed for the remainder of the season, so rehearsals should continue to improve in terms of focus and taking direction”.  The next question was about Mr. Genualdi and his work as the new director. Opinions were mixed, but it is impossible to deny the great results he consistently gets when the band performs. Saxophonist Mia Bornhorst said “He has a lot to live up to, but at the same time, people’s expectations were set almost too high. He’s coming in at a very difficult time. We’re all coming out of a year without marching band, and he has to learn everyone’s strengths and weaknesses, all while directing a very complicated marching band show”. Her answer perfectly encapsulates the opinions that the band and all of its members have.
Lastly, the band members were asked to share their goals for the end of the show. Warren has a history of going very far in marching band competitions and hanging with the best bands in the state.  Kurt Gros, one of the assistant directors of the marching band and the head director of Concert Bands I and II and Symphonic Band I, gave the best answer to this question.  “I want to be able to look back on this show in the future and say ‘Wow, that was really something’. I want this show to leave an impact. I want this show to mean something to someone. And most of all, I want the band to go out and give 100%, because we’ll get out what we put in. It’s as simple as that”.
The Blue Devils will continue to perfect their show and hope to continue to impress audiences throughout the rest of the season. You can see the band perform during halftime at home Football games, September 22nd at their annual Fill the Drum fundraiser, October 9th at the Downers Grove High School competition, and October 23rd at Illinois State University and University of Illinois marching championships.
Delete Image
Align Left
Align Center
Align Right
Align Left
Align Center
Delete Heading