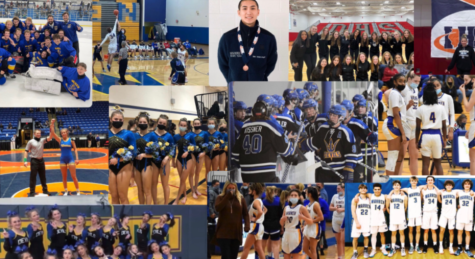 The 2021-2022 winter sports season at Warren is coming to an end. Sports like basketball, gymnastics, wrestling, and many others had successful seasons with dedicated coaching staff. Additionally, lots of seniors are graduating and some are pursuing a further career in their sport. Despite having encountered obstacles such as COVID-19 and injuries, athletes from every sport bounced back and finished off the season strong. Without further ado, let’s get into this year’s stars.

First, we have the Devilettes dance team. From the guy-girl dance in February, to the state competition in Bloomington, it is safe to say that they had a very successful season. Coaches Brittni Tengler and Sarah Stepek did an amazing job leading the team to greatness and a season these girls will never forget. The seniors from Devilettes include Isabelle Corpus, Lauren Gaertig, Nikki Gromala, Megan Kampf, Allyson Khubchandani, and Lillian Kooyenga.

Next is Boys Swim and Dive. With a competitive conference, Warren maintained success and was proud of how they performed. Head Coach Chris Bertana led superstar senior Blake Vander-Jeugdt, to Sectionals where he placed 1st and State, where he placed 4th overall. Blake will also be continuing his career in swim/dive at IUPUI. Jacob Wiser, Ryan Sundberg, Jake Snyder, Cristobal Salido-Malpica, Daniel Mo, Evan Berndt, and Robert Carlson are all seniors who ended their Blue Devil swimming and diving careers with the 2021-2022 season.

Now we have girls’ gymnastics with the coach, Mary Kovac. They had invitationals and competitions at places like Lake Forest, Libertyville, and more. A few girls competed at Sectionals including sophomore Evy Haggerty and junior Amanda Hamann, who did an outstanding job at IHSA State, and placed 4th for the vault. Emma Stermitz is the only senior who finished their gymnastics career this year.

Wrestling had a very empowering year led by head coach, Brad Janecek. Seniors include Zachary Sutor, Nevan Mitrovic, Gianmarco Beltran, and finally, Adriana Demos, who competed in the first-ever IHSA State Girls Wrestling tournament and placed 3rd and will continue her career at Albion College. Furthermore, senior Reyes Gonzalez committed to Lakeland University where he will continue wrestling as a Musky.

Girls and Boys Bowling kicked off their season strong in November and concluded the season this February. They bowled at lanes in Rockford, Arlington, and Island Lake. There were a total of 14 seniors that bowled for Warren this year either on the boys’ team, led by coaches Jim Voutiritsas and Jenna Charbonneau, or the girls’ team, coached by KC Lange.

Next is Girls Basketball. The Varsity team, coached by John Stanczykiewicz, finished with a record of 15-12 and placed 4th overall in the North Suburban Conference. This team suffered through a COVID-19 outbreak in January at the heat of the season, but that did not stop them from playing their absolute best. Seniors at the Varsity level are Angie Truelsen, Samantha Swanson, Grace Lynch, and Annika Gustafson, who will continue playing basketball at UW-La Crosse.

On the other hand, the Boys’ Varsity Basketball team had a cumulative record of 15-15 and also placed 4th in the NSC. Jon Jasnoch coached this team and did not disappoint, especially during the Mundelein/Grant Turkey Tournament, where they took 1st place. This team improved tremendously throughout the season and ended up making it all the way to the Regional Championship. The WTHS boys basketball seniors are Cooper Stacey, Bracy Walker, Andrew Dolan, Howard Mullen, Nate Harris, Gavin Cartwright, Ryan Panek, and Adam Rasmussen.

Lastly, Varsity Cheerleading. Julie Dzubin and Dana Lanio were the coaches and led these girls to achievement. They competed in various invitationals across Illinois and improved immensely over the course of the season. Senior cheerleaders include Wisdom Brown, Hope Cabalfin, Annalise Sambrano, and Morgan Tokarz-Deram, who won the Sportsmanship Award at the NSC Championship.

Be sure to check out our spring sports like lacrosse, track, baseball, and softball coming soon. Hope to see you there Blue Devils!